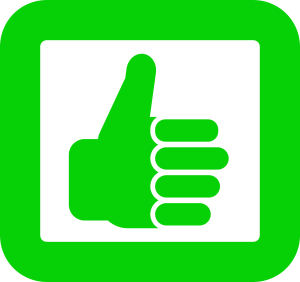 Are there times when being corrupt seems like the necessary thing to do?

Corruption is unanimously seen as a disease that continues to damage the organs of society, undermine legal authority and empirically seen to have a negative impact on economic growth. Any one seen to be engaging in such practices is endorsing illegal activities.

However, is it right to criminalise every individual who is involved in corruption?

A country that operates under poor legal framework, coupled with inefficiencies in the public sector does not provide the ideal conditions to undergo legal business operations.

It is no coincidence that one may be more inclined to bribe in order to bypass these inadequacies. Bribery becomes a significant tool in speeding up processes that may have otherwise been held up due to poor administrative structures. This means business operations can still run, ultimately boosting growth in the economy.

Without this, relying on weak governance to administer tasks, could lead to an economy that is unable to perform. In this context, bribery can be used at the very least to salvage failures created by governments.

Corruptive practices are the lesser of two evils in this circumstance, and dare I say could be a significant part in fuelling economic growth.

Lets take a walk to Chad…

A country located in central Africa, with a population of about 11 million people, faced with extreme poverty, and with a legal system that is unable to deal with the ever-changing economic landscape. Corruption is widespread, and has been publicised to be one of the highest corrupt nations in the world. 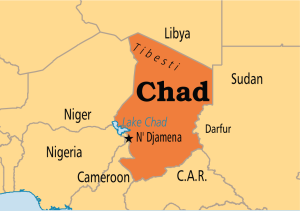 Yet despite this, in the last five years, Chad has on average 6.0% GDP growth, far greater than one can say for many western economies. For such a corrupt nation, Chad is doing fairly well in disguising the poor structural environment. 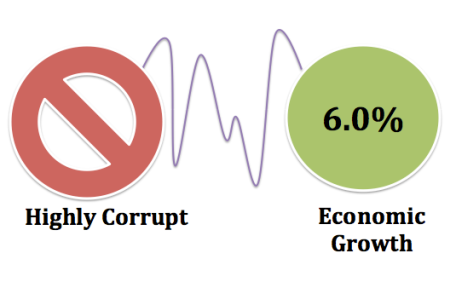 Coming from the back of a civil war which lasted between 2005 – 2010, much of the emotional and physical scars still remain to be prominent in the country.  The next challenge for nations like Chad is to ensure that the fundamentals are put back into place to ensure that positive economic growth can not only be sustained but be a large contributor towards alleviating poverty and reducing unemployment.

It is important to understand that this viewpoint does not advocate corruption as best practice, but does at the very least recognise that it is most prevalent in countries that face extreme systematic failures where there are very little alternatives available.  Providing that the appropriate structures are in place, then one can be able to distinguish the real criminals who are only set to disregard the rule of law and those who only engage in corruption as there are no other option. 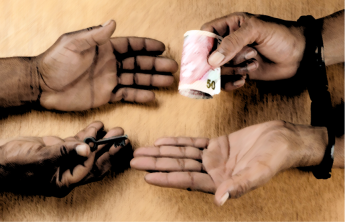 Corruption is often defined as the “misuse of entrusted power for private gain”; a complete undermine of any rule of law framework that has been put into place to promote legal formalities.

Transparency International is an organisation set up in 1993, to promote transparency amongst public officials who are appointed to carry out duties on behalf of the public.

One of the ways in which it demonstrates this is via their publication of the Corruption Perception Index (CPI), which started in 1995. They rank nations in how corrupt a country is perceived to be.

Well one of the major issues with this publication is the subjective nature of corruption.

The concept of corruption differs across the world, whether you are from a small village in Sierra Leone or from a city such as London.

So, what is the key to the varying perspective?

Culture provides social norms and values, and this varies across the world, ultimately altering attitudes towards how businesses ought to be conducted. Offering money to bypass government inefficiencies in order to speed up decision-making can be considered normal practice in one nation but labeled bribery in another.

This leads to the question, is it really corruption or is it culture?

If one can agree that culture plays an influential role in defining ones morals and values, then under who’s perception does organisation’s such as Transparency International form its judgment in regards to the level of perceived corruption?

There are 54 countries that form the African Continent.

Between 2009-2013, only 4 countries on average in the Continent managed to be included in the top-50 least perceived corrupt.

Does the large representation of the west in the top 50 give an indication as to whose ideology dominates Transparency International?

And if so, is Africa a victim of a publication that fail to acknowledge possible culture clashes?

In order to move forward from this, it is imperative we acknowledge the importance of culture but highlight the fact that there must be room where culture falls within the scope that encourages ethical behaviour.

This is where the role of global leaders and influential people become critical in redefining what is right and wrong.

In our follow up we will discuss corruption at another glance, and discuss whether any good can come from it.